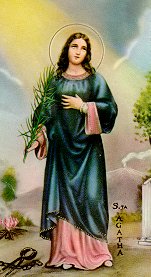 In the middle of the third century, Emperor Decius of Rome announced an edict against the Christians, the most ruthlessly violent yet. Senator Quintianus, seeing an opportunity, offered to drop charges against one particularly beautiful Christian woman, a virgin, in exchange for sexual favors. When she refused, he sold her to a brothel to break her–but she managed to stave off ‘customers’ there as well. Furious, Quintianus subjected her to savage torture and sexual mutilation; her breasts were cut off and she was rolled on burning coals. “Cruel man,” she cried, “have you forgotten your mother and the breast that nourished you, that you dare to mutilate me this way?” In a vision, St Peter appeared to take away her pain. She was near death when an earthquake struck the city and drove away her tormentors. She thanked God for an end to this terror, for the patience to suffer for the sake of Christ, and gave up her spirit.

Today, February 5, is the feast day of Saint Agatha, whose story has been told since the early days of the church. Pray to her for the protection and deliverance of women everywhere who suffer from abuse, rape, and every manner of sexual offense.

“Jesus Christ, Lord of all things! You see my heart, you know my desires. Possess all that I am–you alone. I am your sheep; make me worthy to overcome the devil.” –Saint Agatha