END_OF_DOCUMENT_TOKEN_TO_BE_REPLACED

The original Anabaptists’ intention was to attend to their Lord and their God’s will in a manner that was satisfying. However, there was an accompanying goal that is seamlessly interconnected with the initial one. This objective was to reconstitute the ekklesia in the pattern of the archetypical first century apostolic assembly. To reconstitute something is “to constitute again or anew; especially…to restore to a former condition” according to Merriam-Webster Dictionary. According to The Blackwell Companion to Political Theology the Anabaptists “saw the church as “fallen” and therefore beyond mere reform, and called for its reconstitution along New Testament lines” (70).

“protested what they saw as halfway measures taken by Luther and the other magisterial Reformers in purifying the church of Roman Catholic elements. Their ideal was to restore the New Testament church as a persecuted remnant as it was in the Roman Empire before Constantine. To them, the magisterial Reformers were all stuck in Constantinianism and Augustinianism. These were the two main diseases of medieval Christianity that the radical Reformers wished to eradicate from their own independent and autonomous congregations, if not from Christianity itself” (415).

The Protestant Reformers desired to reform the Church, according to the above-mentioned dictionary to reform means “to put or change into an improved form or condition”. It also means, “to amend or improve by change of form or removal of faults or abuses” and finally “to put an end to (an evil) by enforcing or introducing a better method or course of action”.

END_OF_DOCUMENT_TOKEN_TO_BE_REPLACED

The Appeal of Anabaptism Today

When I was a small child, I had my exposures to Christianity. At the time, my family forced me to attend a Presbyterian church, and I was even forced to be baptized in that church. Eventually, my family stopped attending church altogether, and I was left with a perception of Christianity that was seriously flawed, and very negative. When I stopped going to church in my early childhood, I did not understand the Bible, the incarnation, the crucifixion, the Apostles Creed, and so many other parts of the Christian faith. For my family and I, Christianity was essentially a cultural gathering rather than the Way. For much of my childhood after this, I stayed away from Christianity, especially the Mainline churches that I had negatively experienced as a child. It was not until a few years later that I would begin going to church again.

Not long after my older brother had converted to Christianity through the Pentecostals, he had persuaded me to go to church with him. I did not believe in it, but I respected the teachings of Jesus and the community, so I gave it a try. The church that we attended was an Evangelical Free church (which really appealed to me since they only baptized those who voluntarily chose Christ). Despite the wonderful, lively way of doing church, the Evangelical faith that I was being exposed to was only a facade. On the surface, they appeared to be non-hierarchical and modern, but just beneath the surface was Christendom. Behind the rock bands and charisma was the backing of coercive missionaries, Republican politicians, and war. I had to leave. END_OF_DOCUMENT_TOKEN_TO_BE_REPLACED

Everything Else Is Rubbish

A question for you: Â What are some of the things we do that we consider righteous things to do? Â Can you list them?

There are certainly things in this life that we consider to be righteous things to do. Â Worshiping, justice issues, caring for the poor, advocating for peace, morality and purity issues, ethics of life and nation, love of neighbor, etc., are all things that we consider righteous. Â I categorize them into three categories. END_OF_DOCUMENT_TOKEN_TO_BE_REPLACED

First of all, I think that I am more than just an Anabaptist. Yes, I believe in the priesthood of all believers, voluntary believers baptism, the centrality of Christ, and I love the first few generations of Anabaptists, but I also love the Diggers, Unitarians, Universalists, Congregationalists, modern progressives, and so many other groups. I could be defined as an Anabaptist, but then there is also a lot more to it that I love. The fundamental difference between these other radical groups and the generic Anabaptist today seems to be one of theology. END_OF_DOCUMENT_TOKEN_TO_BE_REPLACED

I am a fan of Greg Boyd’s books and sermons; I really appreciate his stand against Christendom or Constantinianism. Moreover, I value how he is one of the godfathers of contemporary Open TheismÂ since I am an Open Theist as well. However, I recently heard a sermon entitled “We The Church” where his reasoning falls noticeably short. It appears that he forgoes thinking and looking at the matter all the way through because his criticism of others in this area could very well apply to himself. Let me explain the matter fully before continuing with the main point that I want to make.

In the sermon, he relates to his listeners how Woodland Hills Church identifies itself with Anabaptism. He provides a short history lesson on Anabaptistica and he focuses on the nature of the universal Ekklesia from the perspective of the Anabaptists. Eventually he addresses how post-first century Christianity in due course allowed the world to squeeze it “into its own mould” (Romans 12:2 J.B. Phillips). Resulting in the aligned Constantinian Ekklesia to become analogs of Roman and Grecian worshippers of pagan gods even adopting elaborate temples to worship their god, in other words they started to build elaborate cathedrals. Boyd goes on to admit that the Anabaptists met in homes to worship and that they viewed “the people as the Church” or God’s temple in place of a building in the same fashion as the first-century Christians (1 Corinthians 3:16).

Now we come to the problem, Woodland Hills is a 2,500-member church; technically this church would be qualified as a megachurch. A 2,000 + capacity facility hardly qualifies as someone’s living room. A megachurch is not someone’s home; it is a few marble statues or one ostentatious mural away from being called a cathedral. Just because you are not a member of some form of the Catholic Church that does not give you, a free pass if you know the truth of the matter.

END_OF_DOCUMENT_TOKEN_TO_BE_REPLACED

The evil, rotten core of US war and empire and why it should make us all angry as hell 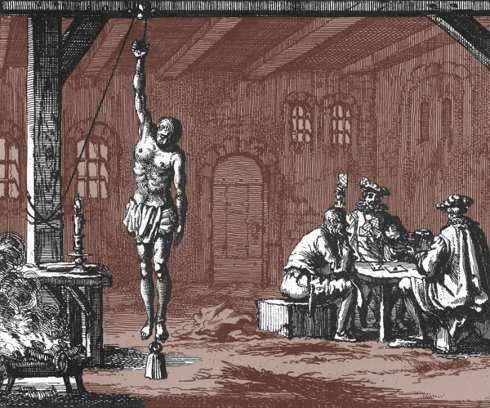 A page from the Martyr’s mirror depicting Geleyn Corneliss, who was hung by his thumb while his torturers played cards. Modified illustration from Third Way Cafe

Yesterday, March 6, 2013, we in the US learned in The Guardian that our government put torture and death at the center of our policy in Iraq. According to the article, Jim Steele, who was heavily involved in the El Salvadoran death squads, was called in to replicate the model in Iraq in 2004 with millions of dollars at his disposal. This strategy, known as the “Salvador Option” was apparently known and discussed at the highest levels of the US government and supervised closely by General David Petraeus. These actions are consistent with US policy since the end of World War II: torture and mass murder in support of US economic interests.

This is no aberration: it is the norm for empire. Nevertheless, many will hem and haw, rationalize and suggest this is still a few bad apples, albeit 4 star general apples. Tragically, most in the United States will simply ignore it. But what about us, as Mennonites: as Anabaptist Christians? What will we do?