If anyone has a chance to watch some or all of these videos, I’d much be interested in your thoughts.

END_OF_DOCUMENT_TOKEN_TO_BE_REPLACED

Sunday afternoon when I got word that my friend Joel Gulledge had been attacked by Israeli settlers in At-Tuwani. Joel was escorting some Palestinian children home from summer day camp when they were threatened by a masked settler with a slingshot. Jan Benvie, a friend and CPTer from Scotland, rushed the children away while Joel filmed what was happening. The settler caught up with Joel, grabbed his video camer and began beating him around his head with it while he punched him with his other hand. Joel didn’t fight back, but yelled for help.

This sort of thing has happened before to CPTers in Hebron and At-Tuwani. These have long been the regions where CPTers are most regularly the target of physical violence. Colleagues of mine have had their arms broken and lungs punctured and been stoned by Israeli settlers from the Havot Ma’on settlement.

So the attack itself is nothing new, but this attack hit closer to home for me. Just two weeks ago I said goodbye to Joel near his home on the north side of Chicago. Joel and I hung out together this summer at PAPA festival where he did a workshop on the situation in Israel/Palestine. And now I have the image of him being beaten in the face with his own video camera in my head.
END_OF_DOCUMENT_TOKEN_TO_BE_REPLACED

Like an episode of C.O.P.S. the names here have been changed to protect the innocent.

Hamilton is in N.E. Baltimore, which is in Maryland, which is in the Eastern United States located in North America. I’ve lived here for two years. I never thought I’d be an urbanite but it’s come to suit me just fine. I like the ice cream trucks, the mixed culture, a plethora of restaurants, the ease of commuting all over the city and burbs in minutes.

I wouldn’t say Hamilton is “The Hood”. It’s one zip code south of the county, the next town south is one of the better places to live in Baltimore, Lauraville, which insulates us. But like all urban areas there are very little guarantees. Some nights it’s quiet, other nights I can hear teenagers swearing loudly at 2am and there’s usually empty beer containers on my lawn in the morning. It’s easy to see that our relative peace hangs by a thread, whether it be the bloods graffiti or the drunks stumbling through our backyards at 11 pm, our quiet community is quietly at war.

But this isn’t a post about Hamilton. Or about urban warfare. Or about gangs. It’s about kids and watching them grow up in a weird ecclectic neighborhood. END_OF_DOCUMENT_TOKEN_TO_BE_REPLACED

In the Wilamette Valley, which includes both Portland and Salem, there are approximately 2000 churches. Some have only twenty members, some have thousands. Given the reputation of Oregon to be an “unchurched” area, there are a huge number of self-sustaining churches.

In the Wilamette Valley, according to the best estimates, there are 2000 homeless people every night. This number fluxuates and there are a lot of varieties of homeless people, but the number is a fair estimate.

If this is correct, then if each church, on average, just ministered to and assisted just one– ONE– homeless person, then the whole outlook of poverty and homelessness would change for the whole Wilamette Valley– for all of Portland and Salem.

I wonder if this statistic could be replicated throughout the United States? If every church in the U.S. would take poverty seriously and just take one one– just one– homeless person per congregation, then the whole landscape of poverty in the nation would change.

And the nation might actually recognize that the church is here to create a positive impact, and not just to suck resources into the personal egos of religious ideologies.

People’s Summit in Winnipeg — Why is it we gather? 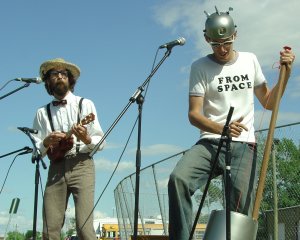 After attending the “People’s Summit for Faithful Living,” in Winnipeg a few weeks ago, I’ve been thinking about the reasons we gather.

Some fine reports were written on the summit, here and here. The only things I would add or highlight would be…

In addition to Canadians, white people were also over-represented. (Out of 570 participants, I’d estimate around 550 were white.) Not to say that such numbers preclude valuable interactions or prove tokenism — I greatly appreciated some the learning tracks that connected indigenous traditions with relating to our creator and caring for creation — but I think it’s important to notice.

I also had a notable conversation with a young pastor who’s drawn to working with suburban youth — creating vibrant alternatives to our destructive culture and showing them there can be more to life than what we consume. I’m glad to know those conversations are happening.

So as a participant I got some ideas and resources, met some cool folks, and ate off compostable plates. But I’m still not sure that conferences like this are justifiable in their current form. END_OF_DOCUMENT_TOKEN_TO_BE_REPLACED

Spirituality from Prison: a sermon on Anabaptist/Mennonite spirituality

Don’t worry. I won’t bombard ya’ll with every sermon I preach. But I thought I’d share this one from this past Sunday since it’s specifically about young anabaptist radicals from a long time ago.

It was night, and Jacob was alone. He left his family and possessions behind on the other side of the stream; now he was alone, surrounded by darkness. And the wrestling begins.

Jacob isn’t a spiritual superhero. He hasn’t mastered the spiritual disciplines; nor has he celebrated them. He isn’t known for fasting. Nor for meditating on Scripture–obviously, since it wasn’t written yet. And he isn’t a prayer warrior.

Jacob isn’t known for any of those spiritual practices. Instead, he’s known for his trickery and tenacity. He will get what he wants no matter what. His name, Jacob, Ya’aqov, means heel catcher and deceiver. His name remembers his struggle with his brother, Esau, in Rebekah’s womb (Gen 25). And his name remembers his trickery and deception later when he steals Esau’s birthright blessing. Jacob, his very name, testifies to his devious ways. END_OF_DOCUMENT_TOKEN_TO_BE_REPLACED END_OF_DOCUMENT_TOKEN_TO_BE_REPLACED

“We Must Look at the Context”

I want to start by saying that I understand that a number of you have an extensive Christian education. By this I mean you have some background in Christian philosophy and theology. I, however, do not. I am mostly self-educated on these matters, bringing my experience and my studies to bear on the issues I’m about to discuss.

So, if this is something you have heard before or there is some technical term for what I am describing, then just bear with me.

END_OF_DOCUMENT_TOKEN_TO_BE_REPLACED

My name is Matt and I have been checking out your blog for a while now and decided that I wanted in on the action.

I am a Mennonite born and bred — in fact a Canadian Mennonite (so the y’all that I used above is put on). You can’t get much more particularistic than that can you? I am what is known as an ethnic Mennonite — quite an odd concept and all but there you go. I grew up in a church that was deeply conscious of the problems inherent in an ethnic definition of the term Mennonite and dealt with it by trying to do everything it could to get rid of anything distinctively Mennonite/Anabaptist. Maybe we were embarrassed about being Mennonite — God knows it was awkward to be associated with horses and buggies all the time. So we just tried to fit in with all the evangelical churches in town.

But the fact that we were just like all other churches meant that there was no good reason to go to our church (unless you liked Mennonite food!), so when I moved away for college I went to all kinds of different churches. Not until I worked for a Canadian Chinese Mennonite Church (OK, the category of Canadian Chinese Mennonite is even more particularistic than Canadian Mennonite!) did I find myself becoming committed to Anabaptist theology.

END_OF_DOCUMENT_TOKEN_TO_BE_REPLACED

I wish I read this book more slowly. It’s a very accessible read, but that doesn’t mean it should be read quickly. Heuertz wrote a vulnerable book, one that puts his heart on display, and I couldn’t help but want to let his words do work on my soul–but that takes more time. Heuertz doesn’t claim to offer any secrets to spiritual success. Instead, he shares what God is teaching him through his friends, who happen to be the poorest of the poor. Through the ministry of Word Made Flesh, Christopher and his wife Phileena have discovered God’s love poured out in the poor, God’s presence in brokenness. Heuertz is on a wandering journey, learning to see God among the hungry in Brazilian favelas and the children sex slaves in Thailand. Can we see what he sees? As Jesus asks, Do you have eyes to see?

The book is organized around 5 virtues, each of which are chapter titles: Humility, Community, Simplicity, Submission, and Brokenness. The threads that bind these together are Heuertz’s engrossing stories about his friends. They are the context. His spirituality isn’t a call to close your eyes and think about God; instead, friendships with the poor make friendship with God possible. Solidarity is primary: “We literally live among the dying as an act of solidarity with our neighbors and our God” (20).

But Heuertz doesn’t start there. His beginnings are steeped in American evangelicalism. END_OF_DOCUMENT_TOKEN_TO_BE_REPLACED