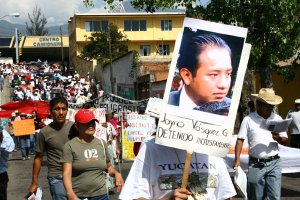 For more stories and the full details of the action, see Oaxaca Christmas Action: Send cards of encouragement and support to families of political prisoners from CPTnet. These stories were gathered by my colleague Chris Schweitzer in the neighborhood of Campimiento in Huahuapan, Oaxaca while he was accompanying CACTUS (Centro de Apoyo Communitario Trabajando Unidos), a local organization that has been part of the Popular Assembly of the Peoples of Oaxaca (APPO).

APPO was formed on June 17, 2006, 3 days after Governor Ruiz sent in hundreds of police who used helicopters, tear gas and beatings in an attempt to drive out striking teachers from the central square, where they had been peacefully camping since May 22. The attack backfired and brought 300,000 residents of the city of Oaxaca to the streets the following day. APPO was launched out of this rising protest movement. The main demand of the APPO is the resignation of Ruiz, but more broadly it is working to build a grassroots participatory political system and includes represenatives from over 360 Oaxacan civil society organizations.

These protests have their roots in years of corruption and limited freedom of expression in a state still controlled by the old Mexican ruling Party of the Institutionalized Revolution (PRI). Ruiz is only the latest in a long line of right wing governors who have disregarded human rights and used strong arm tactics to overcome dissent. Many of the newspapers in the state are dependent on government money and can’t afford financially to report human rights abuses or criticize the government. After Ulises Ruiz Ortiz was elected in 2005, police supported paramilitaries in a month long siege of the Noticias newspaper, which had been critical of the PRI government and uncovered corruption and abuses. (more info at Austin Indymedia)

Throughout the summer and fall, the APPO and its supporters continued to occupy the main square of the city of Oaxaca. Pro-government paramilitaries and plain clothes police responded with increasing levels of violence, killing a number of protesters. On October 27, American Indymedia journalist Brad Will was shot dead by a paramilitary member while filming an attack on protestors. Amnesty International reported that 3 other protests were killed that same day in paramilitary attacks on protestors. (more info from Amnesty International reports) President Vincente Fox responded by sending the Federal Preventative Police (PFP) to Oaxaca to forcibly remove the protesters. As thousands of police moved into the city, they used tear gas, pepper spray, water cannons and batons against protesters and some protesters resisted violently. Amnesty International reported two more protesters were killed and scores injured.

Despite the presence of federal police, the APPO continued to organize major demonstrations. On November 25, they held their seventh “mega march” to call for an end to human rights abuses and the resignation of Ruiz. According to the Oaxaca Solidarity Network “The PFP used tear gas against the demonstrators, beat people, entered houses arbitrarily, and arrested hundreds of children, women, adults, tourists and foreigners indiscriminately. Various independent human rights organizations have documented this excessive force and brutality including the fact that many of these arrests included torture and sexual abuse.” Buses carrying members of CACTUS were pulled over by armed men when they left the city after the march. One of their buses was burned and 23 of their members who had been detained by the armed men turned up in the custody of federal police. Many of those arrested on that day were transferred to a prison in the state of Nayarit, hundreds of miles away without the knowledge of their families. Amnesty International reports wide spread reports of torture and beatings at detention centers. In addition to the Christmas Card action described above, CPT has issues two urgent actions:

Please consider taking one of these actions in response to the repression in Oaxaca. If you’re interested in learning more about the long history of political organizing in Oaxaca among the teachers and beyond, the magazine Dollars & Sense has an excellent piece by David Bacon entitled “Oaxaca’s Dangerous Teachers: Cross-border organizing is part of the background of the current crisis.” It also explored the bi-national organizing efforts started by Oaxacan immigrants in the U.S.