Pleasure of the President and the Death Penalty

Recently I’d begun to think that there was nothing the Bush administration could get to me. Yet reading Three fired U.S. attorneys balked at seeking death penalty today got through my jaded, cynical shell.

Apparently three of the US Attorneys who were fired by the Bush administration were not willing enough to seek the death penalty to satisfy the political bloodlust of Bush, Ashcroft and Gonzalez. The LA Times says:

Richard Dieter, executive director of the center, said that when Bush came to Washington in 2001, his administration seemed determined not only to toughen the federal death penalty statute but to seek it across the nation – including in places where state laws forbid it, such as Michigan.

As a result, he said, “you see a lot more [capital] cases going to trial, unlike what was happening before, where U.S. attorneys were given some leeway to settle cases or take plea bargains.”

Dieter said: “Bush certainly believes in the death penalty, Ashcroft was a fervent believer, and Gonzales was Bush’s advisor in Texas, denying all those clemency requests.”

The three attorneys in question were Margaret Chiara in Michigan, Kevin Ryan in San Francisco and Paul Charlton in Phoenix.

In Michigan, Chiara bulked when Washington made a state case a federal case on a technicality in order to bypass state law which forbids the death penalty. She even had the audacity to fly to Washington to try to persuade Ashcroft not to pursue the death penalty in the case, but was over ruled. In firing her, the Justice Department said they had “no assurance that DOJ priorities/policies [were] being carried out.”

In Phoenix, Charlton made two mistakes. The first was when he hesitated at pursuing the death penalty in a case where the body of the victim had not been recovered (largely because Washington officials refused to pay for it). His second mistake was to protest his superior’s decision to seek to execute a member of the Navajo tribe ignoring a long-standing informal policy to not do so because of the tribe’s opposition to the death penalty. An interesting and perhaps unique example of informal US government policy upholding tribal sovereignty in some small way.

In San Francisco, Ryan’s black mark was even bigger because he successfully persuaded Gonzales to reverse an Ashcroft decision to not pursue the death penalty in a case against a mail bomber.

It seems clear that the firing of these three attorneys were fired at least in part because they did not fall in line with the Bush policy to pursue his clear policy to pursue the death penalty against all plea bargain, mitigating circumstances and protests by defenders and prosecutors alike. This is not justice. It is a macabre trophy politics, where deaths are the prizes.

Listen. First of all, these U.S. attorneys serve at the pleasure of the president. I named them all. (watch the Daily show clip)

At this point it seems most relevant to turn to another well known monarch with a well-known appetite for executions: 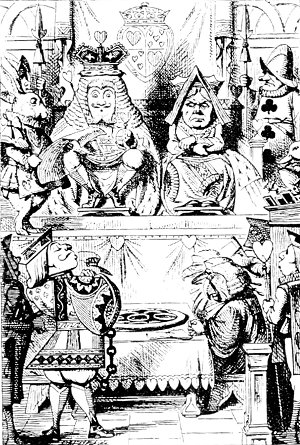 When the procession came opposite to Alice, they all stopped and looked at her, and the Queen said severely `Who is this?’ She said it to the Knave of Hearts, who only bowed and smiled in reply.

`Idiot!’ said the Queen, tossing her head impatiently; and, turning to Alice, she went on, `What’s your name, child?’

`My name is Alice, so please your Majesty,’ said Alice very politely; but she added, to herself, `Why, they’re only a pack of cards, after all. I needn’t be afraid of them!’

`And who are THESE?’ said the Queen, pointing to the three gardeners who were lying round the rosetree; for, you see, as they were lying on their faces, and the pattern on their backs was the same as the rest of the pack, she could not tell whether they were gardeners, or soldiers, or courtiers, or three of her own children.

`How should I know?’ said Alice, surprised at her own courage. `It’s no business of MINE.’

The Queen turned crimson with fury, and, after glaring at her for a moment like a wild beast, screamed `Off with her head!’ (Chapter 8 of Alice in Wonderland)