“It could be that civilians were nearby… it would not be the first time,” 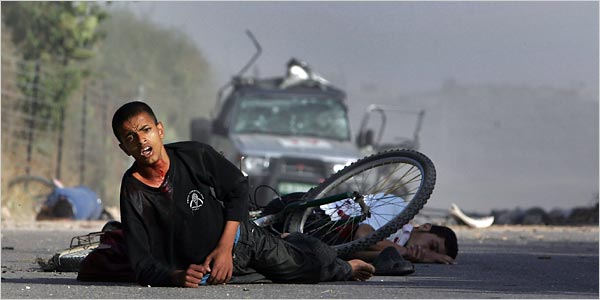 Many of you remember my post from a few months ago on what is currently happening in the Gaza strip in the fighting between Israel and Hamas.

The above image comes from last Thursday, when Israeli military killed over 20 people in one day during fighting in the Gaza strip. 14 of those deaths happened in Central Gaza, and five of those killed were under 16 years old. The image depicts an unnamed Palestinian boy, in what is probably the last moment in his life. He was hit by Israeli tank fire while standing amongst a Reuters TV crew – with vehicles clearly marked as a media crew – that lost a cameraman whose name was Fadel Shana.

This is a link to a video from Fadel Shana’s camera. It is of an Israeli tank in the distance firing a shell at the TV crew – again, a clearly marked vehicle. You will see, just before the video goes black, a secondary explosion in the upper part of the screen. This is the shell cartridge as it explodes, shooting thousands of lethal antipersonnel darts (“flechettes”) into the bodies of Fadel Shana and three Palestinian bystanders, two of them boys.

Here is a link to the NY Times coverage of the fighting that day. Note the comments of Israeli Army spokeswoman Leibovich:

Asked about the many civilian casualties, Maj. Avital Leibovich, an Israeli Army spokeswoman, said the military had struck an armed group. “It could be that civilians were nearby; it would not be the first time,” she said.

Major Leibovich said that if a cameraman had been killed, “we apologize for that.”

“It was not intentional,” she said, adding that journalists took a risk by operating in fighting zones.

Some may not like my reading into this, but I don’t really care. The assumptions behind the rhetoric ring true. If a cameraman dies as a result of a direct attack of a media crew – then the Israeli army is “sorry”. When civilians die, “it wouldn’t be the first time”. The Israeli army is not sorry when Palestinian boys riding their bikes in Central Gaza get killed by attacks on civilian/press targets that are in direct violation of international law.

Moreover, the killing of Fadel Shana was “not intentional” – though it would seem the video proves otherwise – yet, giving Leibovich the benefit of the doubt, what is she saying by implication? Fadel Shana’s killing was “not intentional”, but the deaths of those boys…that was intentional. Or, if I wanted to play nice about it, they simply aren’t important. They are like “refuse in the streets” (as Isaiah put it).

1:2 Yahweh, how long will I cry, and you will not hear? I cry out to you “Violence!” and will you not save?

1:3 Why do you show me iniquity, and look at perversity? For destruction and violence are before me. There is strife, and contention rises up.

1:4 Therefore the law is paralyzed, and justice never goes forth; for the wicked surround the righteous; therefore justice goes forth perverted. (Habakkuk, NJB)