Our most bitter opponents: the Christians who fought against Dr. King

MLK day is day when we appropiately focus a lot on the Reverend Dr. Martin Luther King Jr.’s Christianity and the prophetic witness of the movement he led against racism and white supremacy.

We sometimes forget that most of the white people who Dr. King challenged were Christians. I think it is as important for me as a white person to understand the faith of the segregationists as it is to understand Dr. King’s faith. This is one way I can do my work and understand whiteness in the work of anti-racism.

Let’s start by taking one step back and looking at slaveholder Christianity. Specifically, the faith of white Christians who owned African-American slaves here in the United States. I’ll be drawing heavily on the first chapter of The Black Christ by Kelly Brown Douglas. You can read the whole chapter here.

Were I to be again reduced to the chains of slavery, next to that enslavement, I should regard being the slave of a religious master the greatest calamity that could befall me. For of all slaveholders with whom I have ever met, religious slaveholders are the worst. I have ever found them the meanest and basest, the most cruel and cowardly, of all others. It was my unhappy lot not only to belong to a religious slaveholder, but to live in a community of such religionists. Very near Mr. Freeland lived the Rev. Daniel Weeden, and in the same neighborhood lived the Rev. Rigby Hopkins. These were members and ministers in the Reformed Methodist Church.

What’s going on here? Why in the world are Christians worse slave holders than non-Christians? Now it may be tempting for us today to say, “Oh, they weren’t really Christians,” but I’m afraid that’s too easy an out. Their Christian tradition still shapes our tradition today.

First, after a person is converted to belief in Jesus as Christ, his or her salvation is automatic… this freed many slaveholders to do whatever they deemed necessary to keep their slaves under control.

Second, because Jesus ministry is ignored, his liberating actions do not become a standard for Christian actions… The Christian feels no obligation to treat others, especially the oppressed, the way Jesus treated them. Again, enslavers are free to be as cruel as they want towards a slave, while being assured salvation.
(Black Christ, p. 18-19)

In other words, in order to integrate their faith with their owning of slaves, slave owners spiritualized Jesus. White supremacist Christianity has nothing to do with your material conditions. Brown-Douglas quotes the Edmund Gibson, Bishop of London in the 18th century, laying it out very clearly:

The Freedom which Christianity gives, is a Freedom from the Bondage of Sin and Satan, and from the Dominion of Men’s Lust and Passions and inordinate Desires; but as to their outward Condition, whatever that was before, whether bond or free, their being baptized and becoming Christians, makes no matter of Change in it.

The Bishop was quoted in this Proslavery Petition, November 10, 1785 to the General Assembly of Virginia from the “Free Inhabitants of Halifax County.”

Unfortunately, these values didn’t go away at the end of the civil war. Between 1919 and 1939, according to Robert Moats Miller, white people in the United States “hung, shot, burned, gouged, flogged, drowned, impaled, dismembered, garroted, and blowtorched” to to death more than 500 black people in lynchings. (from the The Protestant Churches and Lynching, 1919-1939, The Journal of Negro History, pp. 118-131) 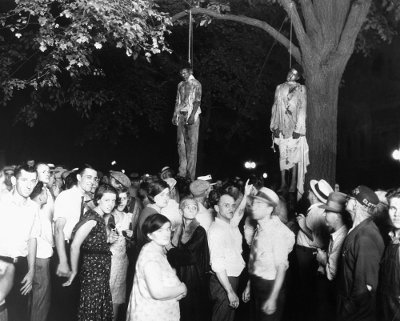 This lynching happened In Marion, Indiana in 1930, two hours from where I grew up in Goshen. 2,000 people participated in this lynching. The names of the black men in this photo are Thomas Shipp and Abram Smith. A third man, James Cameron escaped at the last minute and lived until 2006.

Because of how disturbing the images of Thomas and Abram are, we often miss the smiling faces of the white people in these images: 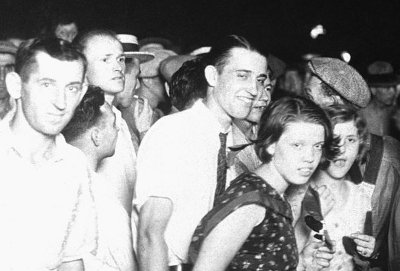 What is behind these smiles? A presentation by Dr. Joy DeGruy first drew my attention to these smiling faces and during a presentation she did at the annual White Privilege Conference in 2010. She pointed out the deep sickness of white supremacy and it’s symptom of dehumanization of black and white people that made these smiles possible.

It might be easy for us to say, “Oh, those people weren’t Christians.” But that’s too easy. Yes, these are sinners, but so are we. Walter White was an anti-lynching activist and president of the NAACP during this period. He said: “It is exceedingly doubtful that lynching could possibly exist under any religion than Christianity” – (quoted in Amy Louise Wood, “Lynching and Spectacle” , p. 50) 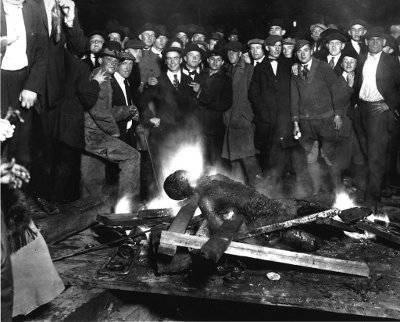 This lynching happened In Omaha, Nebraska in 1919. And 4,000 people participated in the riot aimed at lynching this man, Will Brown. The riot is chronicled in harrowing hour by hour detail on Wikipedia. 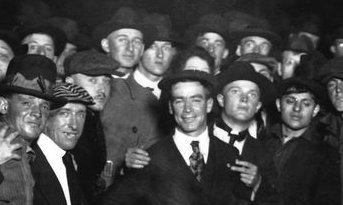 Again we have the smiling faces.

Dr. James Cone in his presentation, “Strange Fruit: The Cross and the Lynching Tree” (video here) points out that these weren’t just random acts of violence. Rather, they worked like Crucifixions. Crucifixions were set up to keep Roman slaves and poor people from political revolt. In the same way, lynchings were meant to keep black people in their place: that is subject to white control and oppression. 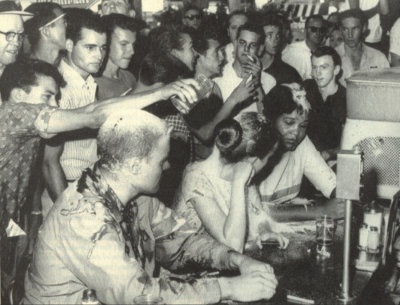 30 years later this same bigotry was on display in reaction to the lunch counter sit ins. This photos is from the a 1963 sit in at a Woolworth lunch counter in Jackson, Mississippi.

While overt bigotry like this is not acceptable today in the way it was then, but that sickness behind those white smiles at the lynching do not go away so easily. They haven’t disappeared as cleanly as we would like to believe.

For example, In the 5 years I’ve lived here near the corner of Pratt and Ashland, it’s become really clear how disrespected the black and Latino kids who hang out on this corner are. I’ve seen police officers call them animals. When I suggested to the officer that this wasn’t appropriate, he told me I didn’t really know them. While this officer happened to be more honest than most, it becomes pretty clear that this is the view held by most officers.

Four years ago, I wrote here about watching an officer sit in hiscar and watch as two black kids fought each other. When I asked him why, he said he was worried they’d grab his gun. Would he have acted the same way if I as a white person were being attacked? This officer was smart enough not to wear his racism on his leave, but the results are the same.

It would be easy for me to see this problem as one limited to jaded police officers who have been soaked in the racist atmosphere of the Chicago Police department. But unfortunately, the problem goes deeper than that. Indeed it such a critical issue, that Mennonite Church USA had anti-racism as one of its four vision and goals from 2000-2010.

We in the US Church today, need to consider slaveholder and segregationist Christianity as we read the bible. Next week I’ll share about how this lens affects how I read the Beatitudes and some practical things ways it helps me to think about how I can be an ally to oppressed people.