This week I watched Hotel Rwanda and The Ground Truth. Both films deeply moved me and I highly recommend them to all of you. 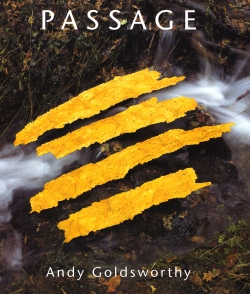 But sometimes I get tired of writing about politics and all that’s broken in the world. So instead I’m writing about Rivers and Tides, a documentary I just watched about Andy Goldsworthy, a British artist whose medium and gallery is nature. He uses rocks, ice, leaves, snow, grasses, flower petals, iron pigment and other found elements to create works that are often transient – washed away, melted or blown into air. The only record of his works are the photographs he takes and shares through books such as Passage (cover right).

The documentary follows his creative process from a beach in Nova Scotia to the meadows of Scotland where he lives. Although I’d enjoyed his photo books before, listening to him talk about his work gave me a whole new respect for his work. He is not just an experimental postmodernist with a clever idea. His vision is rooted in place and time. Like Wendell Berry he is an artist who has discovered the importance of going back to the land and staying put. He talks of the changes he’s seen in the village where he and his family have lived for 12 years: the births, but also the deaths. This appreciation for the process of change is central to his work. 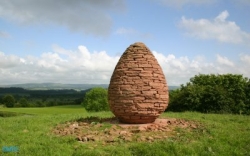 One way Goldsworthy’s conceives of his art is as a way of uncovering the underlying changes that time brings to the land. He is transfixed as he watches the environment around his pieces interacting with his work over hours. The giant red stone egg stand by as the ferns unfurl in a meadow and gradually cover it over like the tide enveloping a similar cairn on the Nova Scotian beach. His giant drift wood dome drifts away into the ocean. His bright green snake of woven leaves winds its way downstream. The documentary weaves these images together in a way that takes the breath away. And you can understand why Goldsworthy describes these moments as his most artistically fulfilling. 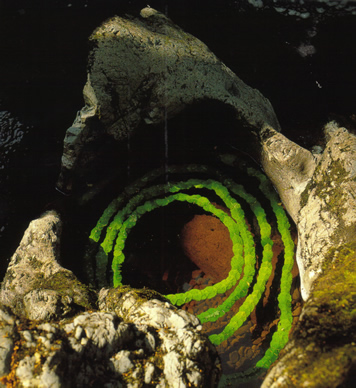 Leaves woven together with thorns by Andy Goldworthy

But with these moments of wonder come moments of frustration as we watch intricately engineered constructions collapse after hours of painstaking construction. Goldsworthy creates pieces hanging on the edge of impossibility. And he finds that edge through trial and error. On the beach in Nova Scotia we watch carefully balanced stone collapse twice. The second time we learn the stones have collapsed a total of 4 times. Each time Goldsworthy gets a bit farther along and says he learns to understand the stone a bit better. We are reminded that the process of building is as important for him as the finished product itself.

Back in Scotland an elaborate web of reeds held together by thorns waivers for a few agonizing moments and Goldsworthy reaches up to steady it like a father with his child(see frame at right). And then the constructions collapses and the artists should sag before starting over. These moments highlight Goldsworthy’s meticulous persistence as he puts together his pieces. There’s a patience here that speaks quietly but clearly to the frantic pace of our lives in our information saturated world. His willingness to invest hours in work that will will dissipate in minutes echoes the elaborate sand paintings of the Navajo and Tibetan Buddhists which are brushed away upon completion. 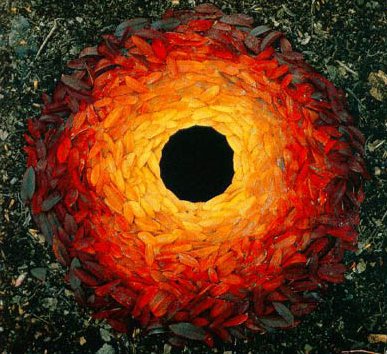 Yellow and Gold leaves around a hole by Andy Goldsworthy

Thankfully, Goldsworthy does not take his vision of temporary work too far. He takes wonderful photographs of them before they disappear forever. In his series of books, his photographs the brilliant colors and contrasts of his art makes one wonder how he does it with only leaves, grasses, rocks and petals he finds around him. Yet he points out that he is merely revealing the color that was already there, mixed in across the landscape. But his unique eye is not limited to his use of color. Perhaps unusual for a male artist, his use of towers, pointy sticks and straight lines is balanced with plenty of holes, curves and round shapes.

Goldsworthy’s aesthetic appeal makes him unusual among contemporary artists. Goldsworthy reminds us that art with vision and depth does not have to be obscure, ugly or inaccessible. As one critic puts it:

The remarkable thing about all this is that of all places here, in the very bastion of modern art, we stumble upon something that has supposedly been utterly banned from it: unbroken beauty!

So all that is to say I highly recommend the Andy Goldsworthy experience to you by borrowing one of his books from your local library or watching Rivers and Tides today.