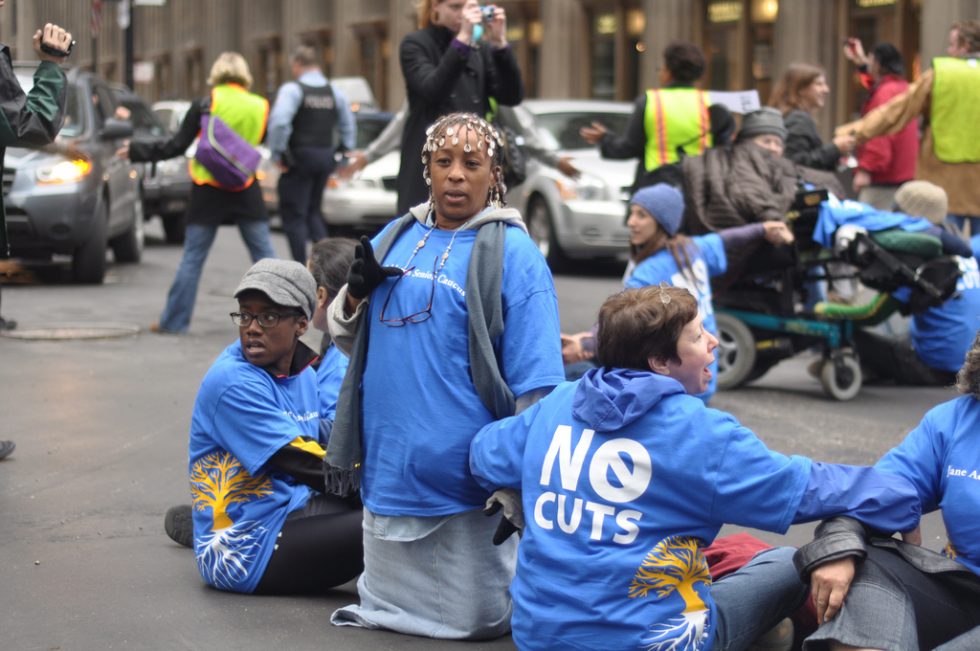 Note: This piece was first published two years ago on my blog for The Mennonite. It was written in response to the 2016 shooting of police offers in Dallas by Michael Xavier Johnson.

In the wake of the shootings of police and civilians in Dallas, many voices are blaming the Black Lives Matter movement and the growing opposition to police violence and white supremacy. But now more than ever we need movements of committed, militant nonviolence.

Shootings like the one in Dallas grow out of what scholar Ron Mock calls corrosive grievance. These are grievances that build up over time around injustice that is not addressed: the injustice of the mass incarceration of black men in our country, racial inequality in of the U.S. education system and the healthcare system and many other layers of systemic racism. For more, watch this 2 minute video from Mennonite training organization Roots of Justice:

Grievances about these injustices become corrosive when people feel powerless and unheard. In his blog post yesterday Mennonite activist theologian Ched Myers reminded us of John F. Kennedy’s observation along these lines 55 years ago: “Those who make peaceful revolution impossible will make violent revolution inevitable.”

It’s telling that neighbors describe Micah Johnson, the alleged shooter in Dallas, as reclusive, living in a house surrounded by weapons. Weapons give us the idolatrous illusion that we don’t need other people and that we can live as islands, dependent on no one.

I’ve been involved in movements for peace and justice since I was in high school. Again and again I’ve seen the way that collective action for social change builds meaningful relationships and deep community. Indeed Charletta and I have built our lives together around both the work and the fruits of radical discipleship. At their best, they provide a deep web of accountability and love that draw us towards one another.

On Friday night I was reminded of this powerful tapestry again when dozens of us gathered together here in the Ojai valley to grieve and show up for racial justice. We walked together, talked together and chalked together the names of some of the 569 victims of police violence in the U.S. in 2016.

Whose responsibility is it to end divisiveness?

The call to end “divisiveness” directed at the Black Lives Matter movement that we hear again and again misunderstands the source of the conflict. Rev Dr. King speaks to this dynamic powerfully in his Letter from Birmingham Jail:

Actually, we who engage in nonviolent direct action are not the creators of tension. We merely bring to the surface the hidden tension that is already alive. We bring it out in the open, where it can be seen and dealt with. Like a boil that can never be cured so long as it is covered up but must be opened with all its ugliness to the natural medicines of air and light, injustice must be exposed, with all the tension its exposure creates, to the light of human conscience and the air of national opinion before it can be cured.

The responsibility to end the divisiveness lies with those of us who continue to benefit from white supremacy. Three years ago today, just after the Mennonite Church USA convention in Phoenix, I wrote about how Jesus lived out and worked with the tension that King described to expose systemic injustice in his community. I wonder whether news anchors today would have called Jesus’ militant nonviolent cleaning of the temple “peaceful”?

In her July 9, 2016 article, Nekeisha Alayna Alexis makes it crystal clear how complicit white Americans are with this system and makes the connection with Jesus’ call in Luke 14:26:

The movement for racial justice in the U.S. today, led by Black Lives Matter, is hard at work bringing air and light to the boil of white supremacy. We cannot delude ourselves that we can cover over the infection again and make it go away.

There are lots of ways to get involved. If you’re white and aren’t sure where to start, look up your local chapter of Showing up for Racial Justice and get involved. If you’re leading worship, consider using Joanna Shenk’s Litany of Lament. As Mennonites, let’s step forward and join in this work for change that is deeply connected with our tradition.

Photo: Woman signing while blocking an intersection as part of nonviolent direct action in Chicago, November 7, 2011. by Tim Nafziger.