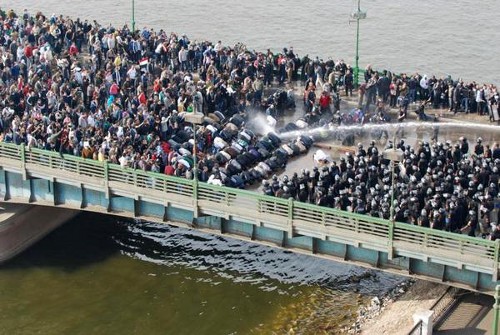 An iconic image of prayerful resistance in the face of riot police from the protests in Egypt today.

The photographer is anonymous. Original posted by ollywainwright here: http://twitpic.com/3u6gvc/full

Operation Payback, Anonymous and Wikileaks: A look at tactics, morality and innovation

Nearly two weeks after my first post on Wikileaks, their diplomatic cables and the resulting fall out continue to make the front page news. The arrest of Assange and attacks on Mastercard, Visa and Paypal by “Operation Payback” have garnered far more attention then the cables themselves. The New York Times quoted one Internet guru comparing Operation Payback to the battle at Lexington that started the Revolutionary war in the United States.

In looking at “Operation Payback” and its denial of service attacks, journalists have begun to focus on Anonymous, which is typically described as the group of hackers behind the attacks. Some portray it as a shadowy cadre of internet vigilantes, meeting somewhere out there in the ether, plotting their next strike. Others paint a heroic picture of activists fighting for free speech against giant corporations and governments. Estimates of the number of people (or computers) involved vary widely.

A little bit of history is useful in understanding Anonymous. I first came became aware of Anonymous through their Project Chanology campaign which focused around opposition to Scientology. In their protests outside Scientology offices, they wore masks modeled on that worn by the main character in V is for Vendetta. Along with demonstrations, their tactics used by Project Chanology were a lot like high school pranks: sometimes silly, sometimes crude, often juvenile and always motivated by a strong sense of righteous indignation. The collective culture of Anonymous was born in the /b/ section 4chan, an internet forum worthy of its own lengthy article. Suffice it to say that 4chan thrives on trolling, griefing, digital bullying and generally offensiveness of all sorts.

END_OF_DOCUMENT_TOKEN_TO_BE_REPLACED

This is not a riot: an effective, nonviolent response to attacks by riot police

In my experience, there are few things more intimidating then an advancing line of fully suited, helmeted, baton wielding riot police. They move forward with the full weight of the state behind them (if not the law) and stomp or beat everything in their path with a chilling methodical certainty. Charging riot police are meant to activate our deepest fight or flight instincts. I’ve witnessed both responses, though I’ve always chosen the latter. I never felt like I had much choice as a committed pacifist.

On Wednesday, in London, disciplined climate change activists found a remarkably simple third way. They stood their ground, put their hands in the air and chanted “This is not a riot”.