Redefining a Historic Peace Church Against Whiteness and White Supremacy 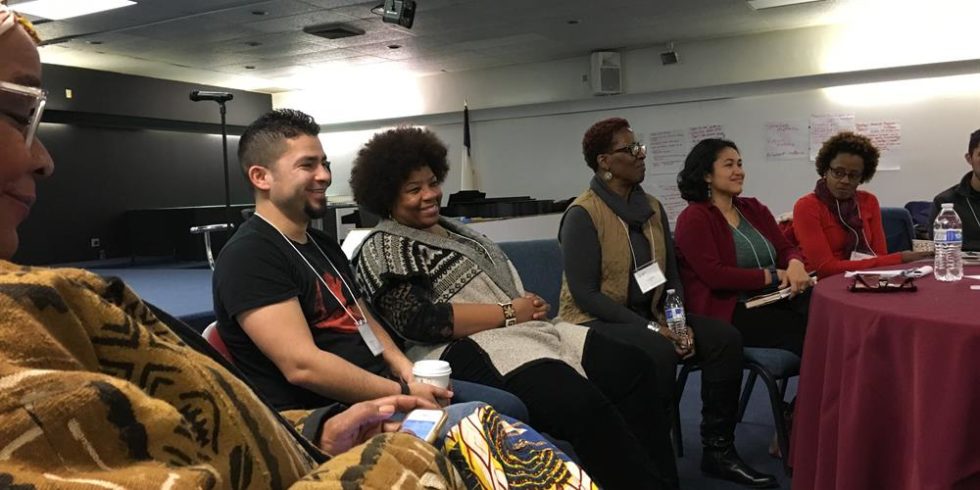 This piece was originally published in June 2017 in The Mennonite magazine.

It’s been seven months since I last wrote in this space about the results of the U.S. presidential election. Since then the broader shape of Trumpism has become clearer: there is a growing wave of misogynist and openly white supremacist groups in the United States that are emboldened to target women, Muslims, immigrants, black people and many others.

For many of us who are white, this feels new and different, but for peoples indigenous to this continent and for people of color, this is simply a highly visible form of what they’ve faced for a long time. My friend Dr. Joe Pruitt recently told me the story of his father, a black man, who fled the south after he received lynching threats due to his friendliness with white women. Closer to home and more recently, my friend Raul Lopez talked about visiting the Ojai valley in California, where I live. As a young man (10 years ago), he and his friends were followed around by white men in white pickup trucks who made it very clear he that he and his friends were not welcome. That hatred is invisible to me as a white person.

Vigilance and dealing with the fear of white violence has been the reality in this country since 1492, but we live in a moment where the whitelash is unmistakable.

Mennonites and the blind spot of whiteness

In a recent interview with Jenny Castro for The Mennonite’s Peacelab podcast, Calenthia Dowdy looked at the history of how Mennonites have understood themselves as a peace church:

Understanding the relationship between Mennonites and whiteness is key. I took a deeper look at this history in an essay I recently wrote for Mennonite Life that looks at how Mennonites have dramatically assimilated into white culture in the United States, especially over the last 100 years. Dowdy, along with Sue Hur and Regina Shands Stoltzfus, who are also part of the podcast, share personally about what it is like for them to operate in Mennonite institutions in which there are only a handful of people of color. Whiteness has deeply warped the imaginations of our institutions in ways that we are only beginning to understand with the help of leaders like these four women.

In her article in March for the Menno Snapshots blog in March, Iris de LeÃ³n-Hartshorn writes about her grief at “who chose to side with the proud, powerful and wealthy through their vote in the November 2016 presidential election.” She points out that this is the opposite side chosen in the “Magnificat,” the song Mary sings after she learns she is pregnant with Jesus.

Mary’s song points back to the tradition of Jubilee, of a regular redistribution of wealth accumulated over 7 years and then more dramatically over 50 years. Ched Myers and Elaine Enns refer to these Jubilee practices as Sabbath Economics.

A group of us have been meeting here in the Ojai valley recently, led by local fisherman and car mechanic Eric Hodge, to talk more about how the values of Sabbath economics apply to our lives. In a recent discussion we talked about how these practices are not about charity or an individual change of heart, but about communal practices and traditions woven into community life that require redistribution. They are designed to treat the illnesses of greed and domination that have plagued human communities for tens of thousands of years.

Jubilee draws on ancient communal practices among human societies that pushed back against the tendency of humans to accumulate power and wealth. Anthropologists call these patterns “reverse dominance hierarchies.”

Those spreading civilization have understood the importance of stamping out such traditions as with the 1881 Potlatch ban in Canada. The Potlatch was a redistributive practice of the indigenous peoples of the Pacific Northwest of this continent. In communal ceremonies, high status leaders would redistribute their wealth to guests, sometimes including competitions among leaders to see who could give away and destroy the most wealth. Colonial authorities saw the practice “as wasteful, unproductive, and contrary to ‘civilized values’ of accumulation.” Those colonial authorities were articulating the values of whiteness that are antithetical to the practices of Sabbath economics that Jesus calls us to.

A New Definition of Peace Church

With this lens, I see Jesus’ sending out of the disciples to make more disciples as a call to join the collective project of treating the disease of accumulation of power and wealth and challenging violence.

The idea that Jesus’ invitation was simply about an individual change of heart is one of the greatest lies of white evangelical Christianity. The fact that 81% of white evangelicals voted for Trump tells us that the emperor has no clothes. White Christianity in the U.S. is still deeply in the grip of what Dr. Kelly Brown Douglas calls “slaveholder Christianity”, which I explored further in this blog post.

The whole concept of repentance (Metanoia in Greek) was about turning away from the patterns of this world and the powers and principalities that focused on accumulation.

In The Mennonite’s Peacelab podcast, Dowdy, Hur and Shands Stotlzfus describe the process that led the Black Lives Matter track of the recent Hope for the Future gathering (facilitated by Shands Stoltzfus) to propose a new definition of Peace Church:

Dowdy talked about the importance of defining violence beyond simply war to include violence by police, violence against women, educational violence and other forms of systemic violence.

“The new definition of peace church has to center other lives. I was thinking about people who I talk to everyday who live lives of violence. I was thinking about trans prostitutes I talk to on a daily who live their lives in fear,” Dowdy said. “I think we [as Mennonites] can be so much more, so much better, so I want to add my voice to the mix. I am trying to remain hopeful. I’ve been hanging out [with Mennonites] for 20 years.”

The three of them talked about the remarkable silence from white people in the room after this proposed definition was read.

“When we ended the circle of people of color with that framework of a definition, woven into the conversation was the question: what is at stake for us and that is the question that we wanted to bring to the wider group once the white leaders joined us,” Shands Stoltzfus said. “And it was disconcerting to be met with such silence.”

She acknowledged that some of that silence was simply because people were joining the conversation midway. “But I guess what I would have hoped for would have been more willingness to process with us what this means. I still sit with that circle of silence that got to be more uncomfortable the longer it went on… In that moment it felt devastating to be met with that silence when asked the question what is at stake for you and how can you join us in this conversation.”

In the years of Trumpism that lie ahead, Mennonites have a choice. Are we going to embrace Sabbath economics and this new definition of Peace Church or will continue to see ourselves as sitting on the sidelines?

The sidelines position was articulated to Vincent Harding in 1961 by Mennonite Central Committee (MCC) leader Edgar Stoesz: “As we refrained from participating in its annihilation, but helped later to reconstruct Germany, so we decline to participate in the interracial conflict but seek rather to bring reconciliation and goodwill.”

For too many of our white Mennonite leaders, a variation on Stoesz’s reflections is still a central message. They see themselves as moderates caught in the middle whose job is to advocate for balance.

For too many of our white Mennonite leaders, a variation on Stoesz’s reflections is still a central message. They see themselves as moderates caught in the middle whose job is to advocate for balance.