Two hopeful stories in the news I recently finished reading Rebecca Solinit’s Hope in the dark: untold histories, wild possibilities (find it at a library near you). It’s a small, wonderful window into hope, written in the midst of the apparent failure of the anti-war movement. It inspired me to watch a little more closely in the news for hopeful stories in the news. I came across two stories about inspiring victories that will both (hopefully) lead to large new areas of land being protected and allowed to return to their natural state. They also show case an interesting contrast in tactics. END_OF_DOCUMENT_TOKEN_TO_BE_REPLACED

So about this rich guy I know

I’ll be the first to admit it’s a strange feeling to log onto www.time.com and read a story involving someone I know.

It’s even stranger to get to the end, do a little more searching for what is being said about this person elsewhere online, and come out feeling quite conflicted about the whole thing.

For those who are reading this post before going back and reading the links, I should clarify what I mean by “know.” I am currently spending five months doing volunteer work at the Stansberry Children’s Home and Daycare in Santa Cruz de la Sierra, Bolivia, and one of the people on the board of directors of Stansberry is Ron Larsen, a US-born cattle rancher who is fighting with the government to keep the thousands of acres of ranch. I can’t say I know him well, but I have met him a couple of times and engaged in run-of-the-mill chit-chat about who we both are and what we’re doing in Bolivia. END_OF_DOCUMENT_TOKEN_TO_BE_REPLACED

An Anarchist and Healthcare

I’m an anarchist. I’m a Christian. I’m a lot of things. I don’t find the need to have an opinion about everything as lots of Americans do. On some issues I’m opinion-less. But some things strike me as odd.

This up-coming election has brought up, once again, universal healthcare. I’m a capitalist and opposed to big government. But I also know “wrong” when I see it. END_OF_DOCUMENT_TOKEN_TO_BE_REPLACED

They will paint a picture of the world in which America’s mistakes are a greater threat to our security than the malevolent intentions of an enemy that despises us and our ideals; a world that can be made safer and more peaceful by placating our implacable foes and breaking faith with allies and the millions of people in this world for whom America, and the global progress of our ideals, has long been “the last, best hope of earth.”

END_OF_DOCUMENT_TOKEN_TO_BE_REPLACED

As some of you may know, I’ve been working in Barrancabermeja, Colombia with Christian Peacemaker Teams since January 5. I’ve been writing regularly about my work here on my blog for the Mennonite, but I thought it was about time I wrote something here on YAR.

CPT’s work here in the Magdalena Medio has changed quite a bit since I was last here 3 years ago. At that time our work was still mainly focused on the Opon, an area where paramilitaries and guerillas threatened the civilian population as they vied for control. CPT’s work there has focused on a physical presence as a deterrent to human rights abuses, threats and killings by armed groups. CPT Colombia continues to accompany the Opon, but has also broadened it’s accompaniment to include other communities in the Magdalena Medio region.

The region is rich in resources including oil and the largest gold deposits left in South America. This means it is also a major target for multinational corporations and their proxies the Colombian government and paramilary groups. Communities across the region are finding ways to nonviolently defend their rights and their land. Today, CPT is accompanying many of the communities where that conflict is the hottest. END_OF_DOCUMENT_TOKEN_TO_BE_REPLACED

Confessions of a half-hearted Christmas radical 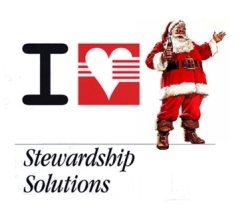 As a Mennonite, and an activist, I’ve always been aware of the huge gaping problems with Christmas as practiced in America. I know all about the Christmas industrial complex and the way it has stolen the true spirit of Christmas. I’ve read many an article about simplifying Christmas and getting back to it’s true spirit. I know that corporate America has taught us to live to consume rather than consume to live. I honor Buy Nothing Day.

But somehow, none of this has ever stuck very well. It’s not that I’m a shop-a-holic or even an extravagant gift giver. But despite my radical aspirations, there’s something sentimental or romantic in me that really enjoys the Christmas tree and the Christmas carols and the warm, fuzzy feeling I start feeling sometime in the week after Thanksgiving. And I’ve never really found a way to shape a consistent alternative Christmas tradition.

But this year, I’ve finally come across someone who takes liberating Christmas seriously. My good friends Tim and Patty Peebles are featured on the cover story of the Mennonite: Throwing out the tree. Ten years ago, Tim and Patty decided that they needed to start from scratch in building a celebration worthy a child whose birth challenged the foundations of empire and financial domination. Read the article to hear about they looked to the 12 days of Christmas and Epiphany to build an authentic radical Christian Christmas. END_OF_DOCUMENT_TOKEN_TO_BE_REPLACED

There hasn’t been a video posted here in a while, so I thought I’d share this one. I’m not a big fan of the Colbert Report, but in this interview Colbert refrains from interrupting Benjamin Barber enough to allow him to make some very provocative points about consumer capitalism: