Love your enemies: An activist’s stance 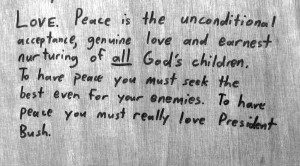 “You have heard that it was said, ‘Love your neighbor[h] and hate your enemy.’ But I tell you: Love your enemies[i] and pray for those who persecute you, that you may be sons of your Father in heaven. He causes his sun to rise on the evil and the good, and sends rain on the righteous and the unrighteous. If you love those who love you, what reward will you get? Are not even the tax collectors doing that? And if you greet only your brothers, what are you doing more than others? Do not even pagans do that? Be perfect, therefore, as your heavenly Father is perfect.” – Matthew 5:43-48

Often only a small snippet of that is quoted, which is fine, because it makes the same point as the whole passage. I’m just really partial to the whole thing.

In March of 2007, I attended a protest against the Iraq war organized by Valpo students in Indianapolis. Frankly, I found the whole thing appalling. I find that I often do not identify with the more vocal components of the anti-war movement, because sometimes it feels they’ve taken the issue of the war and turned it into a war right here at home. Those who oppose the war are our allies, and those who support it – and those who perpetrate it – are our enemies.

At this particular protest, a representative of the womens’ advocacy group Code Pink stood up and told what I can only call lies about our president. Maybe she believed them, but I didn’t – if George Bush were stumbling through the White House in drunken fits and and calling his wife “the C-word” in front of the White House Press Corps, we’d know about it. The media certainly has no bias against sensationalism.

But what really got to me was a war veteran and current professor (of communications, I think) who was sort of MC’ing the event. At one point, he started off on a rant about how he’s against the idea of impeaching President Bush and Vice-President Cheney, because it lets them off the hook. “I don’t want them impeached,” he bellowed, “I want them prosecuted! I want them to spend the rest of their natural lives in a jail cell!” The fact that impeachment does, in fact, mean prosecution (and not removal from office, as he seemed to believe) aside, I was struck by the tone of anger and vengeance that was seeping into this protest.

I did not act; I watched myself act. I saw myself turn from where I’d been standing, with my back to the protest, holding a sign with the name of an Indiana native who’d been killed so that it was visible to traffic passing through the circle. I saw myself walk to an open area in front of the angry man, drop to my knees, and pray.

Your peace, your love, your forgiveness, your mercy….

Tim e-mailed me recently to alert me to a comment he’d deleted, due to name-calling and profanity, from my post about my arrest at an anti-war demonstration. I assume that means I shouldn’t re-post it here, but it essentially lauded me for my actions and had some harsh things to say about the arresting officers, and about police in general.

First, I want to say that the police officers who collected us from the federal building and drove us to central booking were the absolute epitome of civility. The one who drove James and me even expressed some support for our position, though coupled with doubts about our chosen method of expression, and they removed our handcuffs before procedure really permitted it because they could see that we were not a threat. I have no complaint whatsoever against these officers, and would object to any harsh words spoken against them.

I cannot provide the same level of praise for the U.S. Marshals or the Sheriff’s deputy in the court house, but I will say this: All of them did their jobs. They may not have been warm and fuzzy towards us, but I feel that, had they been, it would be the exception. As a former Resident Assistant, I understand a little of the need for detached formality and established dominance when dealing with a “deviant,” and that’s what we were. Nobody can be expected to walk that line perfectly, and while that might leave us some complaint against the power differentials set up by the law enforcement system, I don’t feel that we should cast officers of the law as our enemies or slur them with personal attacks for what, most of the time, really just amounted to being professional.

But the officers’ actions here aren’t really relevant to my point. If this story is made to be about the injustice, perceived or real, of my arrest, then the true point of my action is lost. If the punchline becomes a jumble of harsh feelings towards the police, then the real crime goes uncorrected. My battle is not against George W. Bush and Dick Cheney, or against Richard Lugar and the United States Marshals. My battle is against the evil of violence that can take hold in every human heart, including my own. If I cast people as my enemies, then I have allowed that evil to take hold of me, warping my cause into a point of division and hate.

“Love your enemies” wasn’t just aimed at the masterminds behind the Iraq war: it applies to those of us who oppose it, too. “End the war” isn’t the ethic, it’s the realization of it – and that ethic is love. Our actions must be rooted in love or we will lose sight of our goals and be dragged down into the same quagmire of opposition and retribution that we profess to oppose, and even a total political victory will come at the cost of a moral defeat. I do not believe that the end justifies the means: our actions must reflect the spirit of the world we wish to see, or that world will dance forever outside of our grasp.