If you remember, in my intro post, I mentioned that I am a youth pastor. I am in my 8th month of youth pastoring now, and I would like to discuss with YAR an issue that am dealing with as a pastor: Music.

Nine months ago (before I was a YP) music was not an issue at all in my life. I listened to whatever I wanted to, and on occasion I would censor some “bad stuff” from myself. For instance, if the song blatantly objectified women (i.e. anything on MTV), promoted violence, sex, drugs etc. I would try to avoid it. That being said, my personal “censoring filter” was pretty generous. By and large, if I liked the way it sounded I listened to it. END_OF_DOCUMENT_TOKEN_TO_BE_REPLACED

I have much appreciation for the energy, honesty, courage and openess to address anabaptism past, presence and future. A question on “radical” Anabaptism has not been raised though — or raised sufficiently enough. For this takes much courage and honest. In all actuality, it takes the greatest amount possible — because it will hurt, and for some, it will be excruciating. Because if we desire to be “radical” we must address a radical understanding of the Bible. We must get at the root (‘radix’) of what the Bible is. This is scary stuff! As Anabaptists we must be radical about the nature and character of the Bible. Every issue, every question, every statement that is being talked about here on the Radical Anabaptist blog is rooted (‘radix’) in the Bible. The scriptures are the foundation for all of this. Thus, we must get to the root (‘radix’) of the Bible itself. We cannot stay our hand, we must — for truth’s sake — (for God is spirit and truth ) take the scalpel and dig deep. END_OF_DOCUMENT_TOKEN_TO_BE_REPLACED

I haven’t written into this space for some time now. I apologize for the ways in which that is obvious in what I write below and for the ways it may cheapen my requests from you all. Almost embarrassingly, I’ve been forced to skim over your most recent YAR conversations so that my input doesn’t completely fail to hit some thread of relevancy and interest. Disclaimers…disclaimers… here’s the word I’d like to share:

This is, firstly, a ‘howdy’ from Southeast Asia — northern Laos (Vientiane), at the moment. Secondly, it is a more direct plug for BikeMovement Asia, recently alluded to indirectly on this site by Hinke, Jason and possibly others. Thirdly, it is a suggestion that BikeMovement — in its attempt to draw out individual and collective stories — is one way to approach the theological/social ‘doing’ that is being reckoned with in conversations here. BikeMovement Asia does a lot of talking too. The same sort of talking/analyzing that happens on this sort of site. But we live the stories as well. END_OF_DOCUMENT_TOKEN_TO_BE_REPLACED

On the Ascension of our Lord 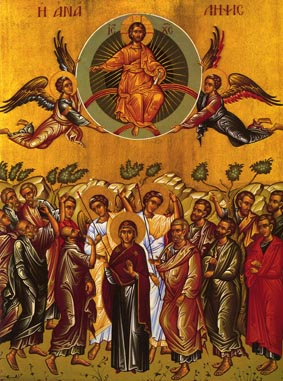 Today, the seventh Sunday of the Easter season, we celebrate the ascension of our Lord into heaven. “‘You will receive power when the Holy Spirit comes on you; and you will be my witnesses in Jerusalem, and in all Judea and Samaria, and to the ends of the earth.’ After he said this, he was taken up before their very eyes, and a cloud hid him from their sight” (Acts 1,8–9).

“The mystery of the Ascension throws open before us the spiritual horizon before which such a gain* must be situated. It is the horizon of the victory of Christ over sin and death. He ascends into heaven as king of love and of peace, source of salvation for the whole human race. He ascends ‘to appear in the presence of God on our behalf’ as we have just heard in the Letter to the Hebrews (Heb 9,24). What comes to us from the word of God is an invitation to confidence: ‘he who promised is faithful’ (Heb 10,23). END_OF_DOCUMENT_TOKEN_TO_BE_REPLACED

Faith: Nature or Nurture? Is it a choice? Can people change?

I was watching CNN today as I was eating my lunch (black beans and saffron rice with piccadillo and spinach salad – awesome) and they were playing a rerun of an Anderson CooperÂ special on Christianity and faith. One portion of the show touched on recent findings that a person’s capacity for faith and spirituality may be genetically related. The story was based on the idea proposed by Dean Hamer in his book, The God Gene: How Faith is Hardwired Into Our Genes. I haven’t read the book, and probably won’t but I did check out a couple reviews of it (Scientific American andÂ Washington Post).

It turns out that Hamer’s science is a little dodgy as it is full of caveats andÂ contradictions and has yet to standÂ up to the rigors of peer-review. Maybe he should haveÂ done a bit more work before publishing, but that’s not really my point. Whether or not Hamer’s work is grounded in what we like to think of as “reality,” it brings up some interesting questions for discussion. And since the blog has been spookily quiet for about two days, I thought I might stir the pot a little (I’m sure you’ve all realized by now that I enjoy stirring it up). If you are game, follow me down this rabbit hole and we’ll see where it comes out.

END_OF_DOCUMENT_TOKEN_TO_BE_REPLACED

Given how often times people tend to became legalistic in our faith, dwindling it down to only ways to act and look, I often find this quote from Micah to be very liberating, especially given how often people condemn and oppress particular groups without much basis.

I also think it is at the heart of some of what Joe was trying to get across.

Micah 6:8
He has showed you, O man, what is good.
And what does the LORD require of you?
To act justly and to love mercy
and to walk humbly with your God.

So many times we find a way to take the easy road out. It is easier to fight against something than to love someone. I am just as guilty as the next person. What do I mean? I mean sometimes we it’s easier to protest and petition than to take the time to love and care for those whom we are petitioning against.

Instead of trying to hold power over people by fighting against gay marriage, maybe we should come under and beside homosexuals and love and serve them. Show them their unmeasurable worth in God’s eyes. Allow God to transform hearts and minds. That’s what he does. Instead of telling homeless guys to “get a job” (or at least thinking it), maybe we should pull up a chair and spend time with them. We can find ways to get them work and a safe, warm and dry place to stay. Maybe even restore some dignity in the name of Jesus.

See, it is a lot easier to protest and petition than it is to love. It is alot cleaner. No one is saying we can’t believe in a cause or vote for what you believe, but have we tried to reach out to those people we rail so hard against? I know we say we love them and it isn’t about attacking them, but let’s put ourselves in their shoes. Jesus didn’t fight and protest against the tax collectors, prostitutes, outsiders and sinners. He embraced them. He served them. He showed them their unmeasurable worth. Do we look like Jesus?
END_OF_DOCUMENT_TOKEN_TO_BE_REPLACED

To Him be glory and dominion unto ages of ages.