When There is No Peace: Where are the Saints?

“The Spirit of the Lord is upon me, because he has anointed me to bring good news to the poor. He has sent me to proclaim release to the captives and recovery of sight to the blind, to let the oppressed go free, to proclaim the year of the Lord’s favor.” Luke 4:18-19

“…the hands of none of us are clean if we bend not our energies to righting these great wrongs.” W.E.B. DuBois

I traveled to Ferguson, MO from August 21-24 along with two other community organizers from New Orleans, LA. We visited the Canfield Green apartments where 18 year old Michael Brown was shot and killed by a police officer and where beautiful memorials had been created. One sign referenced the story of Cain and Abel in Genesis 4: 8-10 — “And the Lord says: ‘What have you done? The voice of your brother’s blood cries out.” And indeed, roses lined the street where traces of Michael’s blood were still evident, crying out for those with ears to hear.

We talked with Ferguson residents, including a group camped out in a parking lot across from the police station and some youth camped in the “approved assembly area” in the parking lot of an old car dealership. Both of these groups said they planned to stay until Darren Wilson, the police officer who killed Michael Brown was indicted, and we brought them water and ice and fruit as a way of expressing our support and appreciation for their persistent call for justice.

That evening, we saw how W. Florissant Avenue was closed to all thru traffic beginning at its intersection with Chambers Road, a full mile away from the “approved assembly area.” Anyone who wanted to join the protest had to walk a mile just to get to the protest site and then march in a spot cut off from the rest of the public, where police imposed a “5 second rule” which required protesters to keep moving, breaking up any conversations among groups of protesters who began to gather together.

This was only the most recent attempt to contain and squash people’s cries for justice. Others who had been in Ferguson earlier reported even more intense police repression. Police shot tear gas and rubber bullets at unarmed people who were in places they had every right to be including their own backyards, driveways and doorways. Purvi Shah of the Center for Constitutional Rights was part of a multigenerational crowd –including a number of children– into which police fired tear gas, with no warning and a full three hours before the midnight curfew that had recently been established. Many first person stories of encounters with police oppression are available if you look for them. What we saw in Ferguson was a community under occupation by police. No one felt safer. The constant threat of violence by police toward protestors was palpable.

END_OF_DOCUMENT_TOKEN_TO_BE_REPLACED 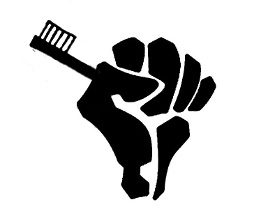