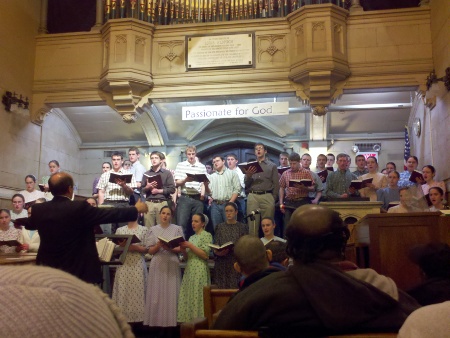 Some of my earliest memories are of sitting behind the Mission’s pulpit in the 1960s, looking onto a sea of expectant faces while my father preached. In retrospect I realize the men behind those faces were awaiting the sermon’s conclusion so they could get their grub.

I also remember Dad leading Mennonites on walks where we’d see groups of men lying on the sidewalk. Such scenes became increasingly rare in the 1980s, though, for by then the bars were disappearing.

Yet the Mission has endured, even thrived. In 2009 it received $15 million in contributions (up from $7 million four years earlier).

Mennonite involvement with the Bowery Mission has a long history. Mennonites never had any ownership stake in the Mission, but have supported it heavily with money and in-kind contributions. For decades groups from Lancaster have come here to give weekend programs.

Recently I became curious to see how things have changed. So on a chilly Saturday in February 2011, I strolled down the Bowery to Prince Street, entered the Mission’s auditorium, and took a seat up front for the 6:30 program.

The Mennonites that night were introduced as the “New Haven youth group.” They sang for a spell and then their minister took the pulpit. He preached from Romans, something about being accountable to God. Unfortunately, his message was riddled with clichÃ©s and I had difficulty staying focused. The brother sitting next to me was snoring. The brother in front of me was holding an audible conversation, with himself.

I’m not wrapped too tight either, frankly, and was soon engaged in my own internal dialogue. “Why can’t you say something new,” I queried silently, “something I haven’t heard a billion times before?” Nothing new came. Obviously the minister wasn’t tuned to my frequency.

After the service, seating for dinner commenced. The Mission’s dining space is limited and I could tell it would be a while before I got my grub. So I sat back, relaxed, and stared at the ceiling. I stared at the verses on the walls. I stared at the pipes of the century-old organ. I checked out the crowd behind me. There were about 50 men (and several women), waiting and staring. None inebriated. Just folks down on their luck.

I wondered why the New Haven group didn’t take advantage of this waiting period to mingle with us. Nothing heavy, just friendly chit-chat. But too late … they were already on their bus heading home to Lancaster.

A week later the service was given by a group from Nickel Mines, Pennsylvania. They opened with hymns and testimonies, followed by a message from their deacon, a man named Weaver. Deacon Weaver wasted no time getting to the nitty-gritty. According to him, the Bible says everyone is headed one of two places.

I wished he’d cited chapter and verse for that claim, since I’ve never found it stated in so many words. Sure, I know boilerplate revivalist rhetoric when I hear it. But this is the 21st century. Are Mennonites still recruiting with threats of hellfire? Were references to eternal torture ever an appropriate way for pacifists to win souls?

In any case, Weaver’s words did not fall on fertile ground. No one responded to his altar call. Later, though, the call to dinner got a unanimous response. I wondered: Do the Mennonites realize that everyone in the audience is there for one reason?

The Mission’s website says they dispense hundreds of meals daily. A worthy endeavor, to be sure. Yet the meals aren’t exactly free. The homeless do pay, with their time and their presence at services. The Mission, in turn, uses the presence of the homeless to justify its existence.

It’s a symbiotic relationship. And a reasonable trade, I suppose. After sitting through hour-long services I’d feel I earned some food too, or something. Maybe a dividend check for a piece of that $15 million pie.

Why, I asked myself, is it assumed that people from the streets need the gospel treatment? Is being homeless the same as being lost?

Having few possessions used to be a hallmark of following Jesus. Apparently we’re too sophisticated nowadays to take Jesus seriously when he urges us to not become attached to material things. (Matthew 6:19-30) But are we so far removed from his perspective that we no longer acknowledge the spirituality of life on the margins?

The service the next Saturday was given by some Old Order Mennonites from Weaverland Conference. As they filed up front, each one carrying a hymnal, I had the feeling we were in for a treat. Sure enough, what followed was a stirring hour of four-part a capella singing. No sermon, no altar call. It was exhilarating as well as bewildering.

I spoke with a member of the group and he schooled me on the origins of Weaverland Conference. One of the reasons they left Lancaster Conference was because of their opposition to innovations like mission boards and revival meetings. Aggressive proselytizing, in their view, is worldly. It invokes an unacceptable sort of emotionalism. Hellfire preaching just isn’t the Weaverland way.

The following week’s group was also from Weaverland Conference: two busloads of young people singing under the direction of Eddie Martin. Like their colleagues the previous Saturday, they rocked the house.

This time, though, the program was interrupted midway for words by minister Richard Burkholder. He spoke about traffic directions, green lights and red lights, water turning into vapor and life as vapor, then concluded with something from Revelation. He walked up to the edge of an altar call without giving one.

I remember taking umbrage, again, at the implication something was amiss with the eternal status of us audience members.

Why do church folk think the unchurched are further from heaven than they? Didn’t Jesus say sex workers and tax collectors are ahead of preachers and deacons in the line to enter the kingdom? (Matthew 21:31) That would leave Bowery folk in a good position. Would it not?

Without a doubt, many people on the Bowery suffer from mental illness and need professional help. For those enslaved by drink, there’s only one way to salvation: Alcoholics Anonymous.

To the extent the Mission provides access to quality medical care, social services, A.A. meetings, etc., they are doing God’s work. But evangelistic services and altar calls, in my view, are antiquated window dressing, put on primarily for the sake of funders.

After this I wanted to visit another soup kitchen to see how it’s done elsewhere. Four blocks north of the Bowery Mission stands St. Joseph House, run by the Catholic Worker.

Catholic Worker facilities are known as “hospitality houses.” The word “mission” is not used. Dorothy thought it condescending. They operate under the assumption that people from the streets have something to teach those of us who live above the poverty line. This is why, in CW parlance, the homeless are “God’s ambassadors.”

I stumbled into St. Joe’s one Friday for early lunch. I was seated with six others and handed a bowl of vegetable soup, accompanied by dark bread and strong coffee. On one wall was a picture of Martin Luther King, Jr. On another wall was a picture of Dorothy, with the quote: “What we would like to do is change the world.” Jazz was playing in the background. On dish-washing duty was a Quaker I recognized from the 15th Street meetinghouse.

During the course of my meal I was asked several times whether I needed anything. At those particular moments I did not, yet I appreciated the manner in which I was asked. I could get used to this, I thought to myself.

It was in the Catholic Worker dining room that I experienced my own hour of decision. I decided, when time comes I’m on the street in need of three squares and a cot, I’ll know where to go. And where not to go.

Charlie Kraybill lives and works in the Bronx. He is a member of the Marginal Mennonite Society (search for our Facebook page) and the Pink Menno Campaign. Email: carlosnycity@gmail.com