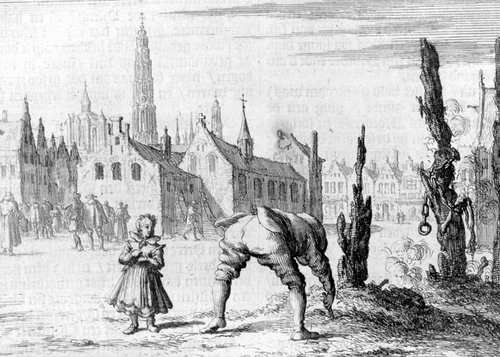 But it isn’t the story of the tonge screw that I want to write about either. It’s the letters Maeyken wrote to her husband and her son that interest me most. END_OF_DOCUMENT_TOKEN_TO_BE_REPLACED

END_OF_DOCUMENT_TOKEN_TO_BE_REPLACED

This past weekend I, along with a couple of other YAR writers, went to a campground outside South Bend, IN for a weekend of conversation, games and networking with about 50 other young ethnic Mennonites in their twenties. I decided to go to the gathering after reading about it in Katie Ho’s post a month ago. I figured it would be a good way to reconnect some small part of the Menno community after being out of the country for two and a half years. And in that regard, I wasn’t dissapointed. While there were a few old friends in attendance, there were also lots of new and interesting people to chat with, including the chance to meet a fellow YAR blogger for the first time in person (Brian Hamilton). There were thoughtful sessions by Ken Hawkley, former Mennonite Church USA young adult worker. The Bike Movement crew did a presentation about their trip, their conversations and their upcoming documentary. And Jason Shenk and Nicole Bauman led a discussion session on young adults and the Mennonite church as part of their new roles with AMIGOS. To balance the serious parts there was also Menno Run, a version of survival. With Anabaptist hunters instead of wolves and foxes and Anabaptist instead of rabbits and deer. All this with liberal doses of engaging conversations. END_OF_DOCUMENT_TOKEN_TO_BE_REPLACED

I’m not usually one to post videos on blogs, but this two part series on the Keith Olbermann show covers the new book by David Kuo, a longtime conservative Christian political operative and deputy director of White House Office of Faith-Based and Community Initiatives.

Tempting Faith: An Inside Story of Political Seduction appears to be just what its title claims: a thorough expose of the way the Bush administration has strung along Christian leaders over the last 6 years. The general themes of broken promises to conservatives won’t come as a surprise, but the specifics coming from an insider are still very disturbing. One minor, but telling quote from the book:

[Christian leaders] were given passes to be in the crowd greeting the president or tickets for a speech he was giving. Little trinkets like cufflinks or pens or pads of paper. Christian leaders could give them to their congregations or donors or friends to show just how influential they were. Making politically active Christian personally happy meant having to worry far less about the political Christian agenda.

But you can watch it all in gory glory for yourself in Part 1:

Dr. Dobson of Focus on the Family has made a new breakthrough in Hamartiology that I just had to share with you:

That’s right, ladies and gentlemen, it is now officially a sin to vote for a anti-war candidate. Jesus couldn’t have said it better himself.

This reminds me of when I was a kid and had a subscription to Club House (and later Breakaway magazine). And I was a devoted listener of Adventures in Odyssey and Mr. Whittaker (featured above) back in the 80’s. Its wierd to try to reconcile the warm and nostalgic memories I have of that show with the outrage I now feel at quotes like these from Dr. Dobson. Anyone else out there who finds themselves robbed of their childhood icons?

YAR Travelogue from Venezuela No 4: A ChÃ¡vez Supporter

After 3 blog posts describing conversations with ChÃ¡vez opponents (or at least skeptics), its about time to offer a different perspective. Fortuantely, yesterday we arrived at the home of AndrÃ©s, a long-time friend of Charletta and a devoted ChÃ¡vez supporter.

But before I get into more big picture politics, I’ll share my first-hand experience with the Venezuelan public healthcare system, the target of ChÃ¡vez’s Mission Barrio Adentro (I hadn’t heard of it till I found this wikipedia entry). I went to a Integrated Diagnostic Centers (CDI in Spanish) in a poor neighborhood just outside of Maracaibo to have a throat infection looked at. AndrÃ©s explained that this was a level 3 clinic (level 1 being a doctor treating people in his or her own home). The system seemed fairly informal, but efficient. There were 20 people waiting in the lobby when we arrived. With no receptionist, AndrÃ©s simply went up to a doctor and asked her if they could examine me. She said yes and we sat and waited for 10 minutes. In that time, most of the people in the waiting room were moved through. And nobody paid any one or even talked to a receptionist. END_OF_DOCUMENT_TOKEN_TO_BE_REPLACED

YAR Travelogue from Venezuela No. 3

On Tuesday we took a tour of the area around Merida with our guide named Alberto. Alberto was born up the valley from Merida in the Andean foothills and for the last 7 years has been a guide for tourists. He told us stories of mountain rescues and handling Anacondas. When I asked him what he thought of Chavez, he said that he liked Chavez, but not the people he works with. Specifically, Alberto likes what Chavez has done to protect Venezuelan culture. He grew up watching Dawson’s Creek on television, but now television stations must also carry some Venezuelan content. In the same way radio stations must regularly air an hour of Venezuelan music. Alberto felt this was a good way to protect Venezuelan culture from being lost.

When I asked Alberto what he didn’t like about the people who worked with Chavez he talked about the corruption he witnessed first hand at an organisation he worked for. He said they recieved government money, but didn’t do anything to show for it.

Chavez has good ideas Alberto said, but they aren’t always carried out well.

YAR Travelogue from Venezuela No. 2

So today I had another opportunity to get a skewed sampling of Venezuelan opinions on MeridaÂ´s cable car, the highest and longest in the world. In one of the stations on the way up, Charletta and I struck up a conversation with an professor of computation (accountancy?) and her husband an economics professor. Not surprisingly, they donÂ´t like Chavez. They described his government as violent and polarizing and they said that freedom of press is gradually being eroded and they are worried for the future of democracy in Venezuela. When we asked about all the projects that Chavez is doing to help people (more on this in a later post), she said that they were good ideas, but badly executed and claimed that they were so corrupt that very little of the money actually helped people.

All this was quite interesting, but then some warning lights went off for me when I shared about working in Colombia and they said “Oh, they have a much better government over there”. For those of you who haven’t been following Colombian politics, the country is currently governed by Ãlvaro Uribe who has promised to end the civil war by beating the guerillas militarily. While I was there working with CPT last year there was a massacre in the peace community of San Jose de Apartado that was likely carried out by the Colombian military. In response, Uribe accused the community of collaborating with the guerillas. Nuff said. END_OF_DOCUMENT_TOKEN_TO_BE_REPLACED

Why start a blog for Young Anabaptist Radicals? I’d been thinking about the idea for a year or two since Michael Sharp started up the Mennonite Progressive list. It seemed like there was interest among folks, but an email list didn’t seem to be the best focus. I bounced the idea off various friends and people I met and found that people were interested in the idea of a blog where they could publish their perspectives in a more permanent format.

Some of the folks I talked with only heard of Mennonites after reading John Howard Yoder and were interested in exploring what it means to be an Anabaptist, regardless of what church they are from. Others grew up in the Mennonite church and identify with their roots, but have questions about where the church today is headed. The people I talked with shared an interest in a space where they could explore Anabaptist values and how they apply to broad areas like economics, war and society and more specific issues like abortion, homosexuality and the “war on terror.” They wanted a space to disagree or agree openly with the church,with society and with each other. END_OF_DOCUMENT_TOKEN_TO_BE_REPLACED

YAR Travelogue from Venezuela No. 1

Yesterday my wife (!) Charletta arrived in Venezuela for our honeymoon. We decided its the first time for both of us that weÂ´ve been in a Latin American country as purely a tourist (previously it was studying, volunteering or CPTing). Venezuela seemed like a great place to go to see beautiful countryside and do some political sight seeing as well. WeÂ´ve been reading about Chavez for the past 8 years so it was about time we saw what it was all about first hand.

First impressions so far have been mixed. Our first political opinions on Chavez were from Emilio and Samuel on the bus ride from the airport into Caracas (tell you something about their economic status). Emilio is a student from the Southeast of Venezuela studying optometry. He used to go to St. GeorgeÂ´s on Grenada but transferred to the Caracas campas after the Reggae culture of too much Ganja and Cocaine got to him. He was travelling with his cousin Samuel who is a professor teaching physical therapy. Neither of them had a particularly good view of Chavez. They said that he has been a polarizing force in the country, turning families against one another (sound familiar). They described his ideology as a mix of socialism, communism and anti-capitalism. These accusations werenÂ´t new to me. However, they also said that in order to get a job with government or even to get a government contract “you have to have the right opinions.”

So thatÂ´s the first portrait. Over the next 2 weeks IÂ´ll occasionally post other perspectives and reflections on the the politics and culture here in Venezuela. Hasta Luego!