Submergent is a network of leaders exploring the intersection of the Emerging and Anabaptist movements. If you add your blog to this category, it will appear on http://submergent.org/

cross-posted from As of Yet Untitled

The other day I had a good conversation with Mark Van Steenwyk, a writer and activist who lives in the Mennonite Worker community in Minneapolis, Minn. The conversation brought me back to concept of Anabaptist camp followers (ACF’s) that I first dealt with in December 2009, in Levi Miller, peace and justice and the Mennonite chattering class, a response to a piece by former Mennonite publish Levi Miller that took a jaded look at “peacenjustice” as a fading marketing ploy and coined the phrase Anabaptist camp followers. In the last paragraph of my article, I offered a challenge to Mennonites to welcome this generation’s ACF’s:

Today, we are seeing a new wave of “Anabaptist camp followers.” As with the earlier wave, many of them come from evangelical backgrounds looking for the missing peace and justice. I’ve heard many first and second hand stories of young evangelicals walking into Mennonite churches longing for the whole gospel only to find a church doing its best to blend in with all the other Christian churches in town. Will we once again blame them as naive idealists and turn our back on them as we focus on keeping those inside the fold happy?

Since then, the importance of ACF’s has become even clearer to me. I was part of the conversation that led to Widening the Circle: Experiments in Christian Discipleship, which is a conversation between ACF’s who have been drawn to the Mennonite church over the past 50 years and cradle Mennonites drawn to radical discipleship. From California to Georgia, the book looks at the seeds that have grown when ACFs have interacted with the Mennonite church. END_OF_DOCUMENT_TOKEN_TO_BE_REPLACED

This year’s anarchism and Christianity conference, hosted by Jesus Radicals, will look squarely at the economic and ecological crisis facing the globe, and point to signs of hope for creativity, for alternative living, for radical sharing, for faithfulness, for a new way of being. We are living in a karios moment that will either break us or compel us to finally strive for a new, sane way of life. The question we face at this pivotal time is not if our empires will fall apart, but when they will fall–and how will we face it? We hope you will join the conversation. END_OF_DOCUMENT_TOKEN_TO_BE_REPLACED

Envision 08: Toward Christian Unity in the Public Square

Is Christian unity in the public square an important goal to work toward? Here at seminary there are many people thinking about denominationalism as a theological issue/concern. I went to a conference to think about some of these issues. It was called Envision 08 (www.ev08.org) I helped out with a workshop on Sexuality and Faith. There were many young evangelical Christians who are freeing themselves from the grip of right wing politics there. The conversation was familiar to an Anabaptist like me, but it was like watching people hear the Good News for the first time. Everyone was so excited that faith meant more than rigid rules, hierarchy, and supporting the U.S.A.

The Declaration below, coming from “Envision: the Gospel, Politics, and the Future” at Princeton University June 8-10, 2008, began with an online dialogue of approximately 100 participants on June 2 about religion, social change, and politics. On June 8, a diverse panel of scholars discussed the results of the dialogue.

After attending the conference and hearing reports about the conversations that occurred throughout many aspects of the conference, the panel met and created the declaration. You can sign it if you want. END_OF_DOCUMENT_TOKEN_TO_BE_REPLACED

Admin’s note: This is the introductory post for our new submergent category. Posts in this category also automatically appear on submergent.org under “Submergent Friends” as part of the wider submergent conversation.

About a year ago, as a known fan of emergent style communities and a young staff member of Franconia Mennonite Conference, I was asked to be a part of a newly developing conversation and relationship between Mennonite Church USA and Emergent Village. The hope was to find a way to connect Emergent churches who were discovering they had an Anabaptist theology with an Anabaptist denomination that could help those congregations find their identity in Anabaptism . . . a few months later, “Submergent” emerged. Submergent is not a project of either Mennonite Church USA or Emergent Village; it is an idea sparked from people who met at this original conversation that is becoming a connecting community.

The name “submergent” is intended to reflect the essence of the 500-year-old Anabaptist movement and the newly budding Emerging Church movement. Both yearn for a faith that reflects the vitally prophetic impulse that sparked when Jesus began his movement 2000 years ago, he called his followers to a radical way of peace . . . a way of loving enemies . . . a way of embracing the outsider . . . a way of forgiveness and transformation and reconciliation.

As it states on our website, submergent.org, “We affirm the spirit of the early Anabaptists as we emerge into a new way of being and doing church. Both Anabaptism and the Emerging Church traffic in subversion. We embrace a counter-cultural identity as we seek to be faithful to Jesus Christ in the shadow of the Empire. We are Submergent.” END_OF_DOCUMENT_TOKEN_TO_BE_REPLACED 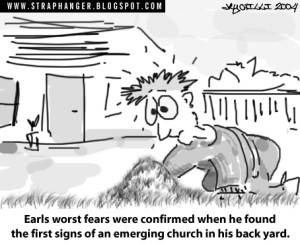 Since reading Dave’s post I’ve become more and more aware of some of the connections between the emerging church movement. Two weeks ago, Encounter, a program on the Australian Broadcasting Corporation’s Radio National did an extensive radio interview with Jarrod McKenna, an emerging church leader and Anabaptist leaders in Australia. It’s well worth a listen. END_OF_DOCUMENT_TOKEN_TO_BE_REPLACED