This last year our church determined that we would open to shelter the local homeless each time the weather went below freezing, but the city wouldn’t permit other churches to open up. We live in a fairly temperate climate, but the winter was cold, and most homeless weren’t prepared for it. After opening more than 15 nights, the city shut us down. Here is my reaction to my conversation with the city. If you are interested in our church and what our focus is, please check us out at www.NowhereToLayHisHead.org

I had a mysterious conversation with the emergency services manager of Gresham and the fire marshal a couple weeks ago. I was talking to them about the need of people sleeping on the street and how much danger they are in, especially when it gets below freezing. I spoke of Fred, whose leg was cut off a couple months ago because he had slept outside in freezing conditions. I spoke of the sixteen year old girls who have been sleeping outside all winter. And about a father and his sixteen year old pregant daughter who found themselves desperate without shelter.

And the response I recieved from them is a lot of fire codes, and how we can’t open because we don’t have 200 square feet per person and how it is acceptable to have a standard of only opening churches when it gets below 22 degrees. And they told me, “This is not a social problem,” and they said, “This is not an emergency,” and they said, “You should just let other people deal with this.” This was a foreign language to me, so I spoke of fire code with them, because it seemed to be the only language we could both understand. END_OF_DOCUMENT_TOKEN_TO_BE_REPLACED

Ever feel like you’re somewhere where you shouldn’t be?

Yesterday I was running on the Coal & Coke Trail outside Mount Pleasant when I found myself in the midst of hunting season in Western PA. Orange-clad hunters with rifles patrolled the woods on either side of the trail.

This isn’t abnormal this time of year…after all, the PA hunting season is short and the interest, strong (i.e. supply and demand sends hunters and the hunting-inclined out in droves), and I’ve certainly seen hunters out and about during my daily runs.

But I felt particularly vulnerable this time around.

Yeah, I was wearing bright red and running in a b-line down a wide jogging trail, and I realize that hunters for the most part are very careful with their rifles. Most of the hunters I saw even acknowledged me with a hand wave or a tip of the cap.

END_OF_DOCUMENT_TOKEN_TO_BE_REPLACED

Immigration and the Church in Phoenix

I live in Phoenix, the front line in the war against the tired, poor, and huddled masses yearning to be free.  I would imagine everything here looks pretty awful from the outside, seemingly without a silver lining, but I’ve been seeing something different, something beautiful happening here.

In the midst of our police raids, our masses of children orphaned by deportation, women giving birth in shackles, and our racist legislation, something wonderful is happing in the heart of the church.  People from all sides of the religious spectrum are coming together in a way I haven’t ever seen before to “do justice, love mercy, and walk humbly with our God” (Micah 6:8).

A friend of mine and I went to a meeting of clergy recently, gathering to discuss what we as a church can do.  We met in the chapel of a United Church of Christ congregation downtown and had everyone from pastors and priests with their collars to rabbis with their yarmulkes, Muslim women in their hijabs and a few Anabaptists with babies in slings across their chests.  Throw in a few Buddhist monks, devout Hindus, Unitarian Universalists, Baptists, and everyone in between and you’ve got a good idea of what the average immigration reform demonstration looks like here.

It’s a rainbow of beliefs putting our differences aside and uniting in the belief of a God without borders, without nationality, and who cares more about someone’s well being then their legal status.  I have in my mind an image of God looking down on us and repeating the phrase “It is good.” as he did in the creation story in Genesis.

The hardest thing about SB1070 and similar hate based legislation is that politically, in a lot of ways, they makes sense.  But I believe that we are called to do something radically different when we decide to follow Jesus.  Jesus’ teaching didn’t make sense.  Loving your enemy, praying for those who persecute you, turning the other cheek, these things don’t make sense at all… and that’s part of what makes it so fantastic.

For Holy Thursday a bunch of gathered at an Immigration and Customs Enforcement (ICE) detention center in Cary, North Carolina, and held a footwashing worship service—we told them we wanted to wash the feet of the people detained inside. If you haven’t heard about these ICE detention centers, that means the federal government is good at what it does: Obama is turning out to be just as good as Bush in keeping secrets from U.S. citizens. ICE sets up field offices in unmarked buildings, tucked away in business parks throughout suburbia. Once citizens find out about a particular site, ICE closes up shop and moves to another unmarked building, tucked away in one of the other many business parks in a different suburb. The detention center in Cary we visited is next door to the offices of Oxford University Press, the publisher of many of the books on my shelves. (For more information on ICE detention centers, read this article from The Nation: America’s Secret ICE Castles).

Here’s some local media coverage of our worship service and protest: “Protesters hold demonstration,” and “Taking the Cross to the streets.”

And here’s an excerpt from the short sermon I preached at the detention center as a Cary police officer kept telling me to stop preaching and leave the premises:

It’s someone else’s problem…or it’s not.

For several months I’ve been making posts that suggest (though I don’t think I’ve said it), that the idea that people are somehow different than they were before is probably a little idealist. I don’t think people are progressive (as in, moving forward or evolving either physically or emotionally/spiritually/physcologically). Perhaps the best time I’ve come out and said it would be the shit-disrupter of a post I made on Christarchy, Humanity on the Fringes of a Moshpit. Essentially, in a long winded tirade, I compare the progressive anarchist/art-school kids to the famed large browed Geico Spokesmen. Such a thing was a dare, especialy among my more liberally minded brethern. But I did it. I did it because I don’t think humanity is really all that different than it was 2,000 years ago. Or 4,000. Or 6,000. We can pretend lots of things, like those people back then were all stupid, ignorant, inbred maruaders, raping the land for everything it was worth. Besides for the inbred thing, I don’t think we are far removed. END_OF_DOCUMENT_TOKEN_TO_BE_REPLACED

I don’t really like calling people names like “stupid” but the title was too much too resist. My apologies.

I was discussing the gentrification of Baltimore recently online. I understand concerns about urban gentrification and I partly agree with them. I can certainly understand wanting to keep neighborhoods in the hands of neighbors, not gianormous corporations and urban planning bureaucrats trying to utilize Eminent Domain to kick people out of their homes.

Part of our discussion centered, and others I’ve had, with the systematic racism of Baltimore in particular. It got me thinking about racism more, a topic which most of you know I could really care less about. END_OF_DOCUMENT_TOKEN_TO_BE_REPLACED 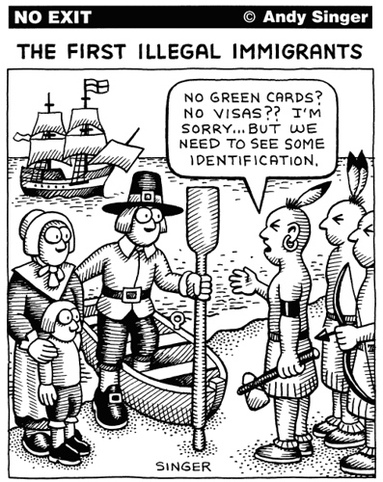 Yet, without as much as a green card, we steam rolled our way across the country, practically wiping out whole people groups. We threw up our flags and claimed this land as our own. Even after states were established, the government steam rolled over their sovereignty as well. Welcome to the new Promised Land. END_OF_DOCUMENT_TOKEN_TO_BE_REPLACED

What would you do?

No, this isn’t one those questions intended to corner pacifists. This is a question that I actually have, based on experience I actually experienced, and a question I would actually like to have an answer to, although I understand that a solid answer to what I am pondering is allusive at best.

Here is the scenario: I am a youth pastor, and not too long ago I was at a youth pastor peer meeting with about five other youth pastors. It was a good meeting, refreshing to hear other people’s joys and frustrations that I can relate to. We ended the meeting with a homemade lunch which was really good, but over the lunch the conversation turned towards everyone’s family. One of the younger married youth pastors began telling of how he was just finishing up the adoption process and he and his wife were about to get their first child: a cute little Guatemalan baby, they had pictures, a name and everything. Then one of the other youth pastors chimed in that her sister (or other close relative, I forget exactly) just recently adopted a Guatemalan baby, so needless to say, the table conversation was about Guatemalan adopted babies for at least fifteen minutes. For these fifteen minutes I kept my head down, and didn’t speak. END_OF_DOCUMENT_TOKEN_TO_BE_REPLACED